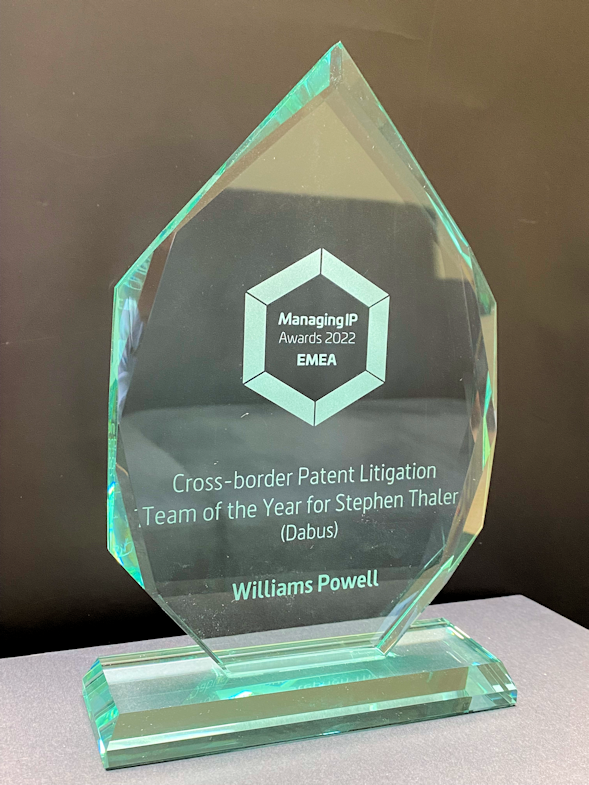 We are delighted to announce that Williams Powell was presented with the special award of European Cross-Border Patent Litigation Team of the Year for the Stephen Thaler v Comptroller General of Patents, Designs and Trade Marks (DABUS) case at the prestigious Managing IP Awards on 15 June 2022.

Williams Powell was recognised for the work of Robert Jehan and his team, including Williams Powell consultant Ryan Abbott, in the important case concerning the issues of inventorship for inventions created by an AI system. Williams Powell was also shortlisted in the category of the UK Patent Contentious Firm of the Year (Patent & Trademark Attorney Firms).

Robert, accompanied by David Grainger, accepted the award at a ceremony held at the Royal Lancaster Hotel.

The Managing IP Awards are presented to firms, individuals and companies behind the most innovative and challenging IP work of the previous year, as well as those driving the international IP market, and we are thrilled to be recognised. Many congratulations to all the winners.

Robert Jehan has also been listed as an IP STAR – Patents 2022, as well as a WIPR IP Leader for his patent work.

The Stephen Thaler (DABUS) cases are ongoing in many jurisdictions. As Robert Jehan is actively involved in a number of pending appeals we do not wish to discuss the merits of any of the decisions at this time.However, we will shortly be publishing a paper discussing the wider issues of the cases. We believe it is fair to say the cases are contributing to the significant and important debate on the autonomous creation of patentable inventions by AI systems.